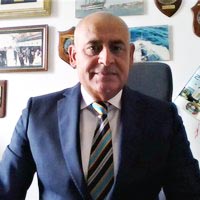 Aniello Cuomo was born in Nocera Inferiore, Salerno, on 9th April 1956. Graduated at Law School of Università degli Studi di Salerno on 1982, started the legal practice in civil and administrative law. On 1983 he passed the exam for public employment and became Junior Lieutenant in the roles of Harbour Master Authorities, a Navy sector within the Ministry of Transportation. On 1988 ha was admitted as lawyer to the Italian Bar attending the following courses years: Maritime transport technique “Law, Technique and Economics of Maritime transport” “La Sapienza” University of Rome, 1989; Course of specialization in International Maritime Law “The new law of the sea and its application in the Mediterranean” University of Rome “Tor Vergata”, 1994. On June 2016 he leaved the Harbour Master service with the rank of Vice Admiral, and he started again the legal practice advising on administrative and maritime matters, focusing in particular on public maritime domain, port activities, coastal administrative services, ownership of vessels, seafarers contracts, pleasure boating and everything related to maritime navigation.

In the 90s he managed the complex and numerous cases of violation of maritime public domain that affected the shoreline in the Campania Region, taking care of both criminal and administrative aspects linked to the related litigations resulting from the abusive construction of the Coppola Pinetamare Village State property, located on the coast of the Municipality of Castelvolturno.

He has been a lecturer in the area of management and use of the maritime domain, of protection of the coastal strip and port system, in professional training courses (Formez) and university masters. From 1992 to 2001 he collaborated with the legal journal “Prime Note” published by Editions of the Autonomies of Rome, publishing comments and notes to regulations concerning maritime, port, shipbuilding and shipowning. He is the author, also of other publications, in maritime matters, among which the most relevant are reported: “Genesi ed evoluzione di una coscienza ambientale globale (Genesis and evolution of a global environmental consciousness)” in “Le Coste Salernitane”, curated by Massimo Rosi and Ferdinando Jannuzzi, Giannini Editore, Napoli, 2005; “Tutela della zona costiera” (Protection of the coastal area) in “L’area costiera mediterranea” (The Mediterranean coastal area) curated by Massimo Rosi and Ferdinando Jannuzzi, Giannini Editore, Napoli, 2002; “Il demanio marittimo: gestione ed uso”( The maritime domain: management and use) in “La fascia costiera della Campania” (The coastal strip of Campania ) curated by Massimo Rosi, Giannini Editore, Napoli, 1999.